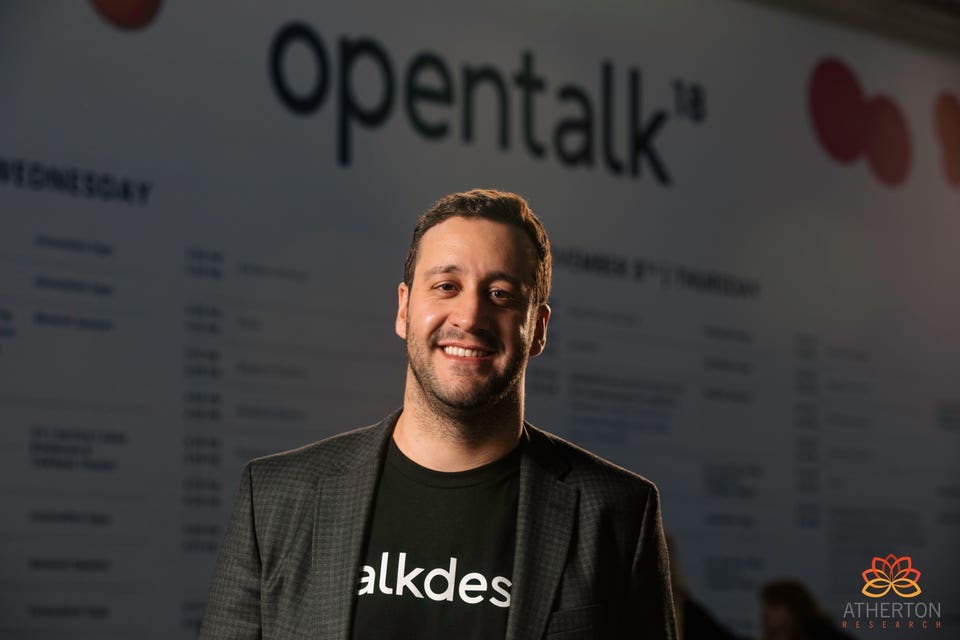 At Opentalk, Talkdesk‘s customer and partner conference hosted in San Francisco this week, I sat down with CEO Tiago Paiva for a wide-ranging interview, discussing topics including the company’s latest announcements, its humble beginnings, as well as Talkdesk’s recent unicorn status – the startup recently raised $100 million at over $1 billion valuation to accelerate its growth.

This interview has been edited for clarity and length.

Jean Baptiste Su: What does Talkdesk do?

Tiago Paiva: What we do is a contact center platform which lets companies communicate with their customers in any way they want be it voice, text, SMS, live chat, chatbot. We provide you with the tools to communicate with your customers, to track what your customers are doing, to give them a better service. So, pretty much everything around that, from analytics to reporting, to APIs, to integrations, around the customer service interaction.

JBS: It sounds similar to what Salesforce does, a CRM?

TP: It’s similar, but the difference is that a CRM is pretty much made to save data. You save data, and then you go get the data when you need it. What we do is, we use many times the CRM to get the information to do the job on Talkdesk. So, it’s similar, but we are an “action” system. We use the data to make decisions, and to help make decisions, and to route decisions. CRMs just saves the data. And, of course, you can say it’s similar to a service cloud or a ticketing system, so that’s a portion of it.

TP: Yes, Zendesk is one portion of the customer service world.

JBS: How is Talkdesk different from a traditional contact center sold by leaders like Avaya, Cisco or Genesys?

TP: A contact center from Avaya or Cisco has a lot of functionality, but it’s the same system that has been built 30 years ago, so it’s a very monolithic system: They go to your company, they deploy the servers where you are, and it probably takes a year to get everything done. And then you are stuck like there’s no or little integrations with other systems like Salesforce, Zendesk, Slack or the latest innovative tools because there’s not an open API. So what Talkdesk does is, we do everything that Avaya and Cisco do, but we do it in a new open way, with no necessary hardware to deploy. Call it the new world.

JBS: In the cloud?

TP: Exactly, in the cloud. Everything in Talkdesk is open, everything has an API, so if you want Talkdesk to work with Salesforce, with Zendesk, perfect. Try to make Cisco or Avaya work with Salesforce and Zendesk, you can, but it’s probably 6 months of work. So, we do the same thing, but in a new way. Easier, better also not as expensive, if you think about Capex.

JBS: And what about this new wave of companies like RingCentral, Aircall or Dialpad, that also do communications in the cloud?

TP: In the communications space, there are 2 main areas: One of them is the contact center (CC), and the other is unified communications (UC). The latter is where the Ciscos and the PBXs of the world are, as well as Aircall and RingCentral. These are the phone systems you have on your desk. On the other hand, Talkdesk is a contact center, so we have a lot more advanced functionality. When your needs grow, then you usually move from UC to CC. In the CC space, you have the on-premise solutions, which are the Ciscos and the Avayas, then you have the first generation of cloud-based contact centers which are the Five9, inContact, Genesis, 8×8, and then you have the second generation, and that’s where Talkdesk comes in. Talkdesk is the only solution right now that’s 100% cloud-based. There’s nothing, there are no servers. No one else does like that, and we’re the next generation, a native cloud-based contact center-as-a-service.

JBS: Let’s switch now to your go-to-market strategy. When you started it was all self-service, then you added a direct salesforce and more directly a partner channel. Talk about this evolution.

TP: So, we do have some partnerships, Vodafone is one of them, in Europe, in the UK, but still most of our revenue comes from direct sales and we have our sales team working with customers on the ground, and calling them, and bringing them to Opentalk and all of this thing. So mostly it’s still direct, just at a bigger scale. When we met in 2012, we were very focused on small businesses (SMBs). So we used to do self-service and that works up to a certain size (3-5 users). But if you go above that size, then you need a sales team. Now we are on projects with 50 users, 200 users, 500 users, so we do that through an enterprise team that’s on the ground.

JBS: Today at Opentalk, you’ve announced several things like Talkdesk IQ, the 100% uptime SLA and the $10 million fund. Can you talk about some of these?

TP: When you make a phone call to chat, Talkdesk is in the middle, so we know the number you are calling, the time you are calling. We can even analyze your voice and see if you are upset. So, we have all this information and then we realized, why don’t we do more with it? So, that’s where Talkdesk IQ comes in. So what IQ does is take all this data and tell our customer, the call center operator, “Look, this is what you shall do. This is what we recommend. This is the next step.” Think about it as when you use Gmail and that Google suggests words to finish your sentence. Similarly, in the contact center world, we recommend things for you to do: Buy this product, or change the phone number, etc. So, it’s a recommendation engine that is now in every product we do.

TP: Yes, there’s no one in the industry that does that. Salesforce doesn’t do that. Zendesk doesn’t do that. We only found one other company that does that, in the entire software world, which is Splunk. So what this tells our customers is that we are committing to you, and we are committed to work all the time, and no one has done that this before.

JBS: So what happens if your service goes down?

TP: It’s like a Salesforce Ventures type fund, where we want to invest in our partners, to be able to grow with them, and be able to understand what they are doing and be much closer to them so we can build products for our customers. It’s also a way for us to grow the number of apps in our own app store, App Connect, which is very similar in concept to Salesforce’s AppExchange.

JBS: Talk a bit more about Talkdesk, the company

TP: We have offices in San Francisco where our headquarter is, Salt Lake City, Porto and Lisbon in Portugal. And Portugal is developers and engineers and products, and the U.S. is everything else.

JBS: Why do you have your R&D in Portugal?

TP: For a few reasons. First, I’m Portuguese so it’s easier for us to communication especially in terms of product development and we can hire really the best ones in Portugal. So we have 250 engineers now (out of 500 employees total), and 80% of them, they have a Master’s Degree. And the rest is probably going to have a Ph.D. So there’s a lot of quality there. And the true fact is, we are not competing with the Googles and the Amazons and the big, big companies of the world with a lot of money.

JBS: Last month, you’ve raised a $100 million. That’s a lot a lot of money, even for a Series B. What did investors see in Talkdesk to pour that much money at a unicorn valuation?

TP: Yes, it’s the largest fundraising for a startup in the contact center industry. A few things. First, they saw how fast we were growing, by customers. As you can see, we are much smaller than the big guys, and we have a conference with 10 times more people than them so you can see, our customers really like Talkdesk and investors see that. And the second thing is, how much the market is growing really fast.

JBS: Can you be more specific?

TP: In terms of employees, we’ve gone from 10-15 employees, 4 years ago, to almost 500, now. In terms of revenue, we did our series A three years ago, and in that period our revenue grew more than 10 times. And this year we’ll grow a lot faster than last year. And the contact center market is estimated to be about $25 billion a year, and only 15% of that is in the clouds. So, this 15% will become 50% in the next 4 or 5 years, so, that’s your growth, $10 billion dollars coming into the clouds.

JBS: And the unicorn valuation?

TP: In the end, a valuation, is what it is. It’s not everything. It helps. That wasn’t the plan, I never wanted to be a unicorn. That wasn’t the goal, to be honest. Our goal was, let’s raise money to be able to keep growing the company. We were lucky, everything worked out and the valuation was very good.

JBS: Finally, talk about Artificial Intelligence (AI), about how it’s going to replace humans or not, especially in contact centers

TP: I’m an engineer, so at some point, I believe that’s going to happen. I think we’re going to be so good at developing software that we’ll replace humans, but we are not even close to that now. Everyone says we can replace humans with robots. But this is for basic things, basic questions. But how can a robot replace the interaction we’re having right now, our conversation? It’s very complicated. And when you think about contact centers, when you call United Airlines, you don’t want to talk with robots. Let’s be honest. If I talked with a robot, I’d be yelling at the robot, so you want to talk with a person. So, the way we see it is, AI, at some point maybe, will replace humans, but right now AI will help humans do their job. And that’s our goal, is to help the United Airlines’ customer service rep to support the customer better, versus replacing her/him. But, 5 years down the line, 6 years down the line, who knows?